The sprawling set designed for Nexstar Media Group’s new primetime national newscast is bracketed (quite literally) by a look inspired from its logo design — as well as other visual language cues meant to give “NewsNation” a dynamic and flexible space.

When Nexstar Media Group announced plans in early 2020 to launch a three-hour national newscast in less than a year, creating the multiple studio venues for the venture had to be done on not only a tight timeline but without knowing exactly what the show would look like.

From the beginning, Nexstar knew the sets had to be visually on par with “heavy hitter” cable competitors CNN, MSNBC and Fox, notes Emmett Aiello, VP of design at Clickspring.

Nexstar also needed a space that would visually define a brand for a newly established news offering and be dynamic enough to allow for multiple looks through the show’s longer three-hour runtime.

Rendering of the ‘NewsNation’ main studio from Clickspring Design.

Quite appropriately, Clickspring spotted scenic inspiration in the newly designed logo from Troika — the “NewsNation” sandwiched between two brackets meant to be a nod to the show’s focus on storytelling.

The bracket shape quickly became the heart of the actual look once Clickspring had determined the general layout of the studio and newsroom space.

It shows up multiple places — including as a “frame” for anchor desks and presentation pods, on set monitors and video walls.

The bracket is also found on a larger scale in a variety of implementations, including both as a forward-facing element and from other perspectives.

One of the anchor desk positions inside Studio 3, using the large LED wall with a Chicago skyline.

For example, one of the largest instances is the impressive, two-story bracket used to frame out the balcony and structural elements on the south wall of the studio.

Meanwhile, nearby, the motif is found, in a top-down perspective, in the layout of the glass partition walls that separate the working weather center from the primary broadcast space.

Where the bracket provides a strong, structural shape, circular elements dubbed “crop circles” were added to the mix by Aiello and designer Christine de Witte.

During initial design discussions that included the notion of “flyover states” and how they can often be overlooked on traditional newscasts that are based on either coast as opposed to the midwest roots of “NewsNation,” Aiello and de Witte came across the images of real-life crop circles — and decided to incorporate them as “abstracted ornamental language.”

‘It’s a brilliant motif that really gave life to the design vocabulary,’.

Instead of repeating the same exact ring outline over and over, Clickspring created a myriad of iterations of the element based on the wireframe of concentric rings segmented into quadrants.

The element found its way upstairs to the circular elements installed in the ceiling space of the newsroom studio, as well as walls featuring the same design as in the primary studio — which features an impressive span of the elements along one wall.

This area is fronted by an array of six LED panels (dubbed the “six pack”) that are motorized so they can slide side to side and rotate into any number of combinations thanks to automation from Showman Fabricators.

The six-panel LED display, known internally as the “six-pack.”

Six panels were used because, early in the design process, producers decided to divide the nation into six distinct regions in terms of coverage.

This allows each of the panels to represent one of these regions or, in other scenarios, six different stories, when they are used independently or as part of a rundown-style intro at the top of the broadcast.

“What intrigued us most about the automated panels was the idea of them moving on camera to transition from one moment to another. We wanted there to be a bit of ‘ballet’ about it,” explained Aiello.

Showman Fabricators, which handles fabrication for both broadcast and Broadway clients, created a system that allowed for fluid on-camera movement in any number of potential cues, borrowing from its theatrical experience.

Clickspring armed WGN America with a slew of different options for how the panels can be used either independently or collectively for everything from standups, anchor desk shots, remote interviews, weather and more — but the system also can be modified to create new options as the show’s usage of them evolves.

Opposite the “crop circle” installation is that double-height south wall — dubbed the “Chicago wall.”

This wall features faux whitewashed brick with five “windows” created using seamless LED panels. The central one spans behind the functional glass balcony that intersects the structural bracket element twice as it runs from one end of the space to the other.

The Chicago wall was inspired, at least in part, as a way to pay homage to the newscast’s host city. Plans call for the panels to showcase sweeping views of the city.

While the teams debated on how much Chicago should be referenced visually given that the newscast serves a national audience, the legacy of WGN’s signal once being broadcast nationwide ultimately led to the decision that the city would show up on air behind anchors and the newscast would be “placed,” at least in terms of the audience’s perspective, in Chicago.

“Given the central location of the city as a beacon for the nation, we decided it was smart to underline Chicago,” said Aiello.

The balcony, which WGN America plans to use for special report hits, is accessed via a practical staircase that also serves as the backdrop for a standup and social media area with its own interactive flat screen and pod tucked in front of the steps.

Above this area is another nod to the nationwide notion of “NewsNation” — an LED band designed to showcase digital style clock readouts spanning the six timezones in the country (four for the continental U.S. and one each for Alaska and Hawaii).

The wall opposite the social media area is devoted entirely to the weather center, with a vertical LED video wall between the two glassed-in work areas which are trimmed with low profile LED panels.

In-studio meteorologists can present from in front of the wall (or the six-panel array) — a look that can also be complemented with a two-piece modular presentation pedestal that will be especially key during severe weather coverage and comes equipped with touchscreen capabilities.

At the center of all of this is an open space that can be leveraged for a multitude of in-studio standups and the primary anchor desk.

The anchor desk, which is emblazoned with the WGN America logo, features sliding modesty panels that allow it to adjust from a two-person panel to three, four, five or even six people in a 270-degree arrangement.

The anchor desk is a wildcard that can be positioned anywhere in the space, with the ultimate goal of keeping the viewing experience fresh throughout the three hours.

Here again, Clickspring baked in positioning options for “NewsNation” that allow for a variety of backgrounds and interactions between video elements or other venues in the space, but ultimately the desk positioning and configurations are nearly limitless.

As another way to keep the look fresh, as well as to serve digital needs, Clickspring and producers also opted to create a multi-venue open studio in the newsroom built upstairs from the primary set.

The upstairs newsroom set of “NewsNation.”

At 12,000 square foot attic space was mostly being used for equipment storage. It didn’t have any of the infrastructure necessary for a functional office, much less a broadcast environment.’

The newsroom also features a circular, four-person “digital desk” that can be used to produce live breaking news and other coverage on the fly throughout the day. All four positions have a mini camera on a gooseneck while one includes integrated computer monitors for controlling digital coverage directly.

“The desk is designed for social media hits. There’s a ton of equipment integrated into the unit that allows for each talent position to have its own mini-broadcast setup complete with a webcam, microphone, and dashboard,” notes James.

In addition, the newsroom beyond is decked out with video panels dedicated to each of the six regions of the country, making it a dynamic backdrop for additional feeds.

“The newsroom features six bays of desks that each aligns with specific geographic zones of the country. The layout of the newsroom was informed by the need for these six ‘zone editors’ to coordinate with the broader editorial team,” said Steve Dvorak, VP of design at Clickspring.

“Since the newsroom features a 2,000 square foot open broadcast area, the newsroom is seen as a background in a variety of shots. Therefore, we introduced some branding for the zone editor bays, as well as custom light channel monitor wraps that mimic the bracketed ‘NewsNation’ logo around several bays of competition monitors. Finally, we introduced limestone, wood, blue, and metallic finishes throughout the space to align with the material finishes in the studio environment,” said Dvorak.

All of this was designed, engineered, built and installed during an incredibly tight turnaround given the scale of the project — and, of course, during a pandemic.

Clickspring and its team had only about three weeks to get full design approval in order to meet construction deadlines. Once it became clear that the pandemic would have a profound effect on life (and the project) going forward, the team adapted quickly.

Thankfully, supply chain delays didn’t have as much of an effect on the project as expected, and Aiello also notes how responsive Nexstar and its team was.

“They had the vision needed to guide this huge project while recognizing practical hurdles,” he noted.

Clickspring worked closely with Blake Russell, Nexstar’s vice president of station operations and content development, and Jennifer Lyons, WGN America’s vice president for news, to manage the design process. The design firm notes how flexible and willing to dive into details of everything from chair color to cable management they were.

On the ground, fabrication was split between two scenic shops — Showman Fabricators and Chicago Scenic Studios — a must for a project of this scale with such a tight deadline. The project also leverages local Chicago stagehands — many of them out of work due to theater and performance venues being shuttered — and craftsmen, all of whom had to operate under COVID-19 guidelines.

Clickspring also credits Eastern Lighting Design as well as Aoto and McCann for providing video technology, Broadcast Blinds, Bramco and Rees Architects as key partners in making the project a reality that was delivered on time in the middle of a pandemic.

All told, the project provided numerous other challenges that likely would have been there even without the coronavirus outbreak.

For example, the two fabricators each handled different components of the build, many of which had to line up exactly once installed in the studio or newsroom.

Clickspring also had to design a set for a show that was still under development at the time, so flexibility was a given, notes Aiello.

That said, the “do something big and ambitious” direction from WGN America turned out to be key in creating the broadcast environments.

Ultimately, Clickspring was able to create a main studio set that packs a lot of punch into its footprint, and key design decisions ensured it shot wide despite the tight space that will ultimately give the “NewsNation” concept a network-caliber look that came together in under nine months. 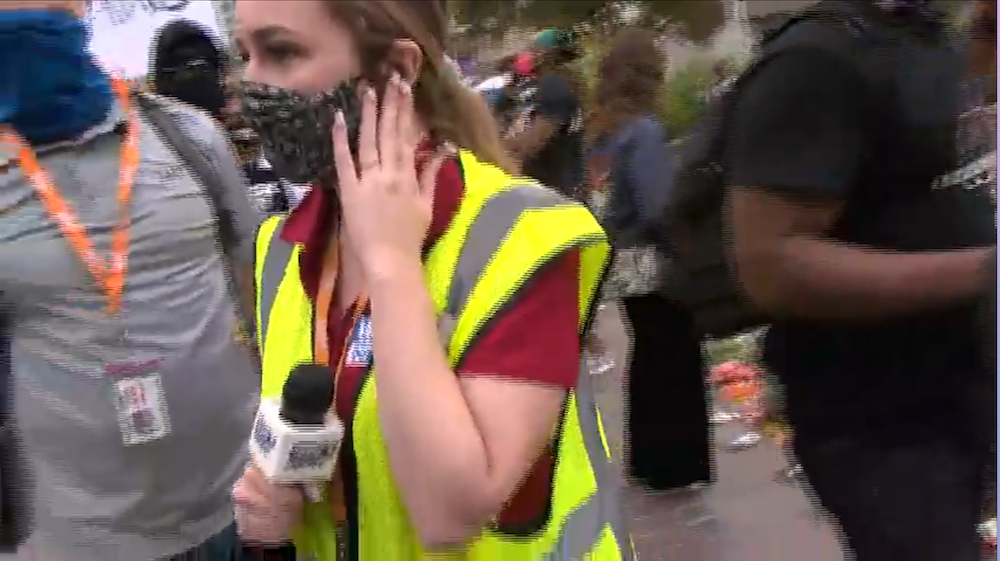 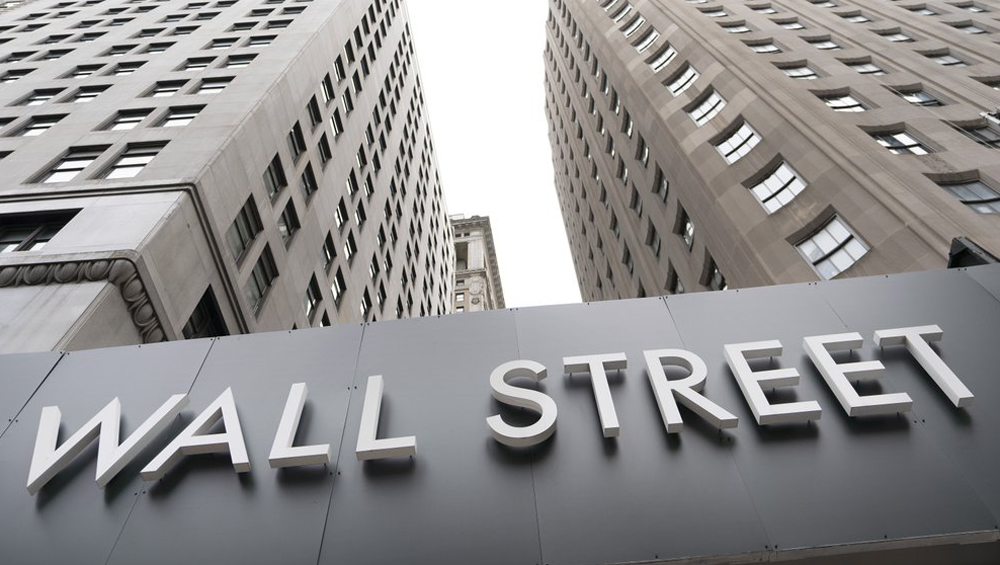 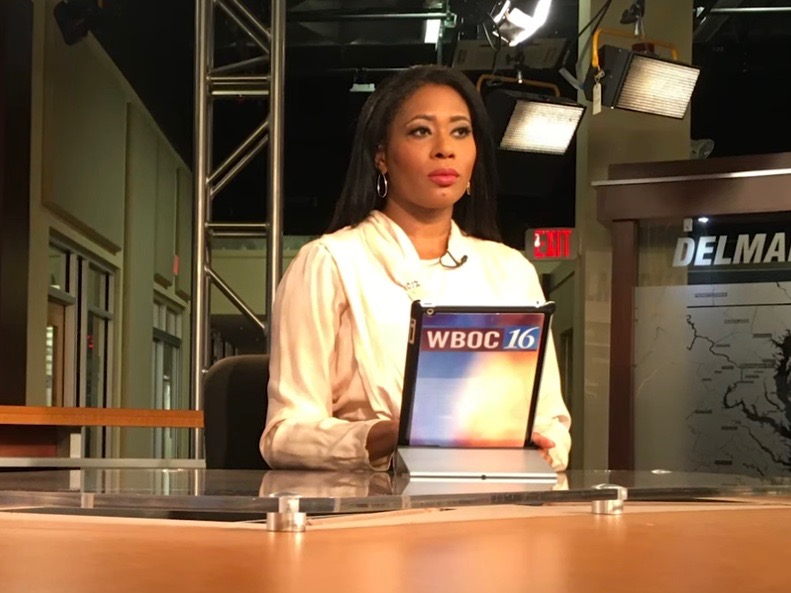 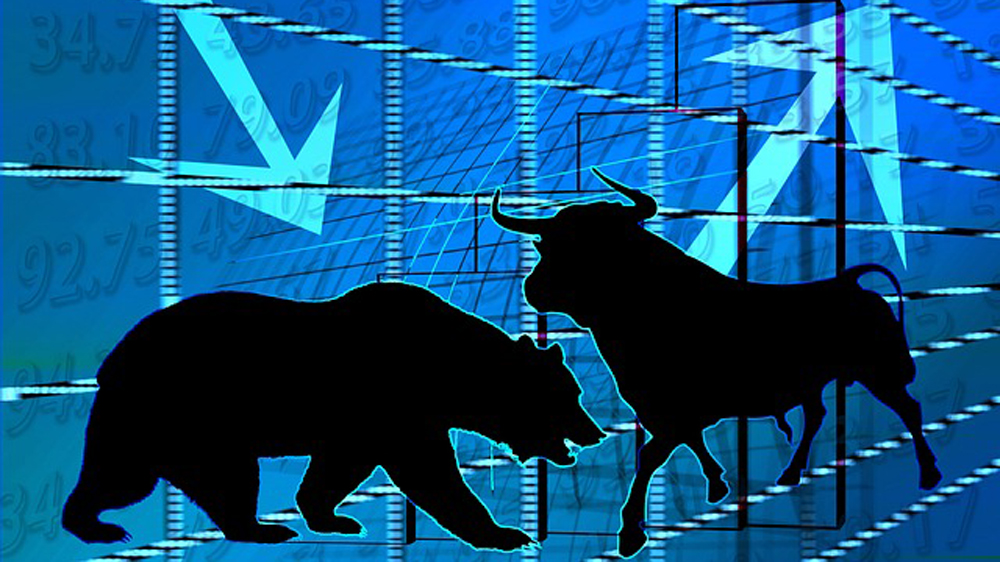 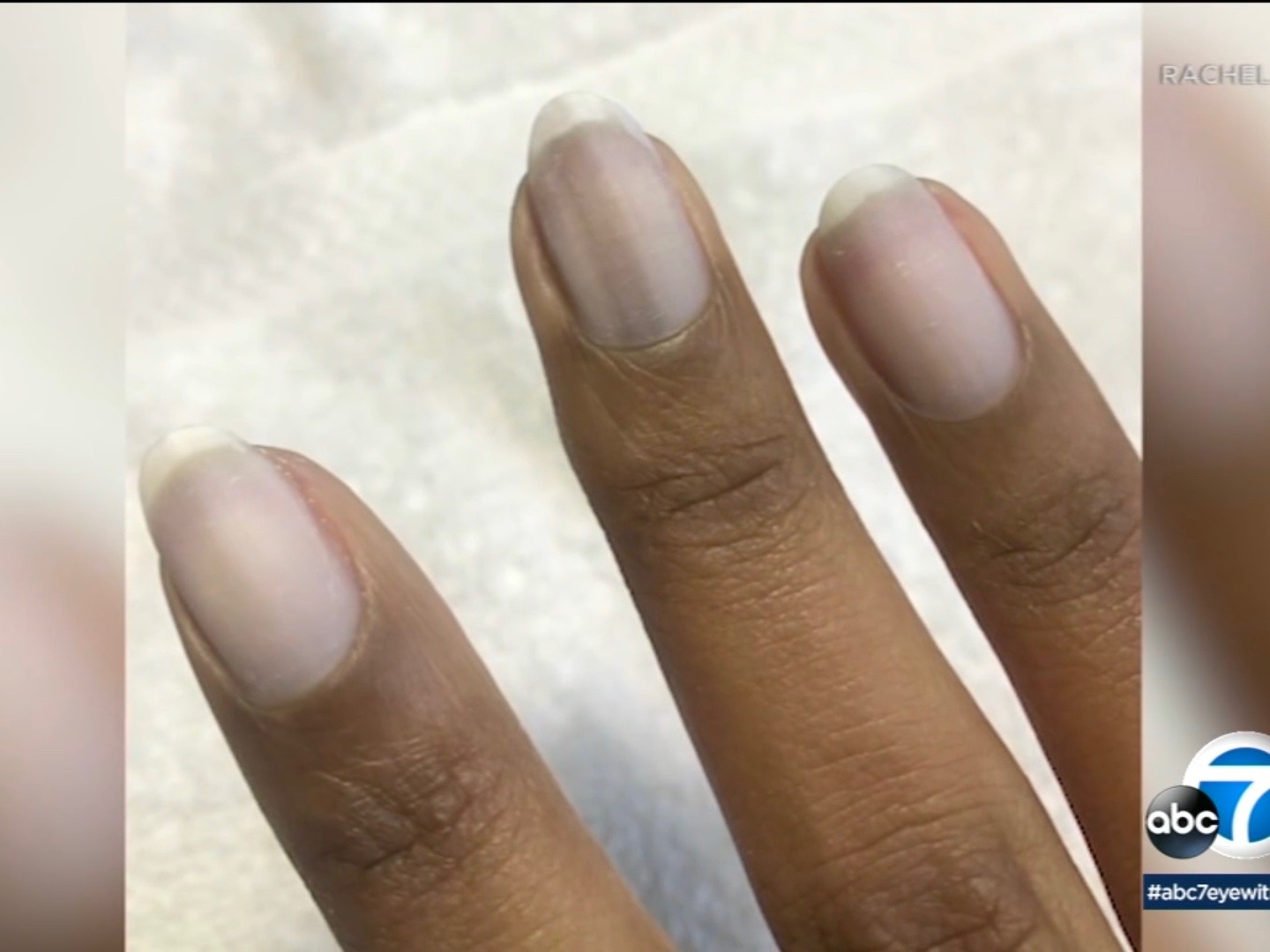 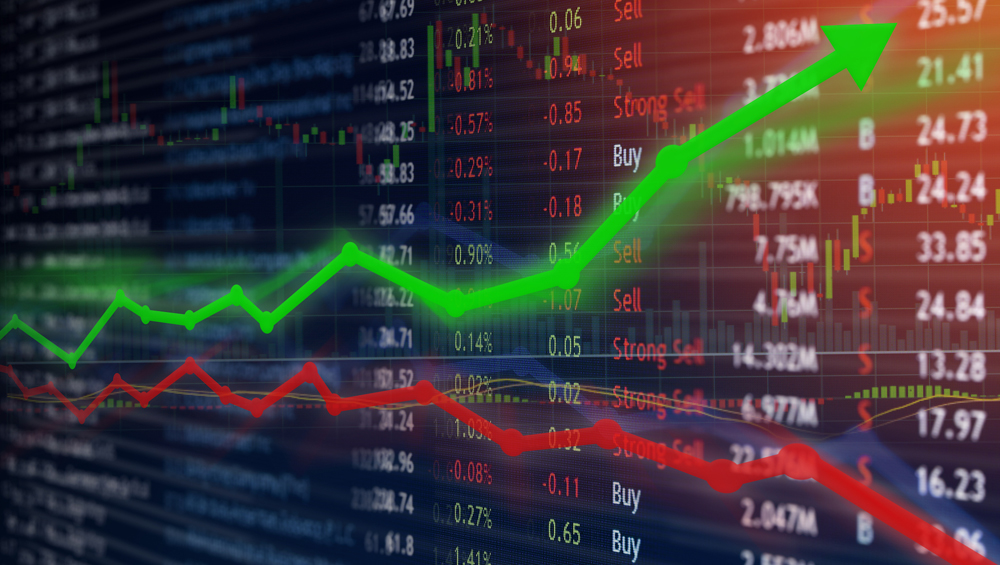